Despite initially cancelling some events, the Runswick microclimate proved to counter the forecast, and allowed the events to be rescheduled on the Sunday. 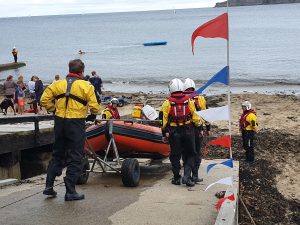 The Friday evening saw the ‘Beef Supper’ take place in the Fishermans’ Institute. Every year members of the public are invited to the supper where the Crew of RBRB serve a three-course meal to the guests. This is then followed by the drawing of the raffle and live auction. The three main raffle prizes included a telescope, binoculars and soda stream and were sponsored by Morley Glass & Glazing (Leeds), Normans Office in Billigham and Rob Matthew Wealth Management. The auction prizes included a large teddy, a number of paintings and tickets for sporting events including Leeds Carnegie and the Ashes. Many of the auction prizes were donated by our long term supporters, the Fojt family. The event was a huge success culminating in speeches from the Chairman and Crew Leader.

Sunday morning’s coffee morning saw Mike Sewell, Sparky and Monty showcase the correct use of the De-Fibrillator monitor as well as how to deliver CPR. This welcome refresher was well received by all that attended the session and concluded with Mike showing off the very first De-Fib machine which was designed at Wilton.

This year’s RBRB display was designed to provide the public with an insight into some of the manoeuvres and procedures we practise as well as one or two smart manoeuvres. This included the use of throwlines, man over board, ring of safety and swimming back to shore together to make sure they all make it back safely. The event also saw the introduction of the new microphone and amplifier which greatly enhanced the commentary.

Following the display members of the public were invited for a ride on the Rescue Boat with Spirit II watching on. This is a hugely popular event which lasted well over an hour and everyone who had a go loved the experience.

The Aquathon was re-scheduled on the Sunday afternoon. Two races took place, for under 14’s and over 14’s. A total of 17 teams of two took on the event. The eventual winners of the Robert Newby Trophy going to Tom Bottomley and Andrew Kelly.

Peter Blenkinsop, Chairman, said of the weekend: “We would like to thank the village, crew and committee for all the hard work that made all this possible. The weekend was a lot of fun for all of us. We raised over £5000 for the Rescue Boat. Thank you to all our supporters.”