Volunteer-run Runswick Bay Rescue Boat has gratefully received a £2512 donation from the Co-Op. 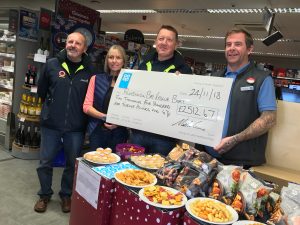 Named as a donor charity for the Co-Op’s local community fund, the Runswick Bay Rescue Boat was selected to be one of the local causes who benefit from the 1% donation the Co-Op give to members buying their own branded products, carrier bags and scratch cards.
Since November 2017 when the local community fund was launched, the Co-Op has raised £19 million for local causes nationwide.
The Runswick Bay Rescue Boat (RBRB) is extremely grateful for this donation. As a volunteer-led organisation, with volunteer crew members, the charity is always in need of funds to keep the operation going.
Formed in 1982, The RBRB is an inshore facility which works in close cooperation with the RNLI and HM coastguard with a primary remit to ‘nip in the bud’ incidents that are visible from the village and to access difficult locations along the shoreline where larger boats would struggle.
“This donation provides much needed funds which will be put towards further crew training and equipment over the next twelve months” said Peter Blenkinsop, Chairman. “The crew, committee and local Runswick Bay community would like to pass on their heartfelt thanks to the Co-Op – this money will make a huge difference.”